The three most luxurious toilets in the world

Posted at h in Blog (EN) by Yolanda

The bathroom is, more and more often, one of the most special spaces in the house. It is a place of rest and relaxation that can be made the most of with small decorative details and beautiful furniture. But there are those who go much further when it comes to choosing their toiletsfrom the eccentric to the scientific. These are the three most luxurious toilets in the world:

Pure gold toilets
Dalí had already dreamed of a golden toilet as a prop for a film so expensive that it was never made but it was the Chinese who made it a reality in 2001 to exhibit it at the Hang Fung Gold Technology Show in Hong Kong.
Jeweler Lam Sai-wing designed a toilet in 24-karat solid gold, and if that wasn't enough, he also included gem-set gems. For maximum splendor, not only the toilet is made of gold, everything in the bathroom (sink, tiles, towel rack and doors) is also made of solid gold..
The set was valued at 29 million dollars and the bad thing is that it could not be used. Even visitors to the exhibition had to cover their shoes with plastic protectors so as not to scratch the very delicate floor covered with 900 grams of gold leaf.
It may seem eccentric and unattainable, but after the exhibition they received several orders for gold-plated accessories.
And it is not the only toilet made of gold: years later, the Italian artist Maurizio Cattelan created a toilet called "America" with 18-carat gold which represents the eccentricity of the rich. It functions as a common toilet and was used by thousands of people during its exhibition at the Guggenheim Museum in New York in 2016.
The museum offered this peculiar work of art as a temporary loan to Donald Trump when he asked to take a Van Gogh painting from the Guggenheim to the White House. The New York museum apologized for not being able to offer the painting, but found the peculiar toilet more appropriate for the president of the United States. 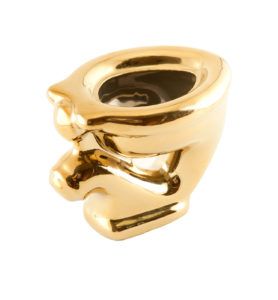 The ISS toilet
Eccentricities aside, the world's most expensive everyday toilet is exorbitant, literally. Specifically, it floats around our planet aboard the International Space Station.
NASA acquired a Russian-designed model for 17 million euros, and is specially designed to work with the difficulties of zero gravity, which is already a great achievement. It includes leg straps and bars to hold on to.
Its functionalities include a system that desiccates solid waste, eliminates bacteria and odors, and converts urine into drinking water. A certainly useful resource when you live in space.

Cutting-edge Japanese technology
Of course, the Japanese apply the highest technology even to satisfy their most intimate needs. The result of this is a sanitary, with a dashboard worthy of a spaceship. and includes heating, a self-cleaning system that eliminates odor, a hot water jet and air drying to complete the experience.
The Japanese think of every detail, so the toilet seat lowers by itself, a function considered a "marriage saver".
The toilet is not exactly cheap: it costs between 3,000 and 5,000 euros but it is present in most Japanese homes and also causes a furor among celebrities. 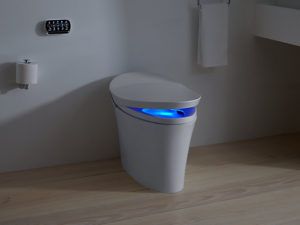 At Tegler we have a range of sanitary ware innovative design, stylish and beautiful, and much more affordable!
On our website you will be able to see some of the most popular models, such as the Legend series and the Dorence series.
Contact us at without obligation.

The factory will be closed from April 11 to 17? no orders will be filled. Dismiss

English
This site uses cookies and other technologies so that we can enhance your experience on our site: Customize Cookies -    Read More
Privacidad